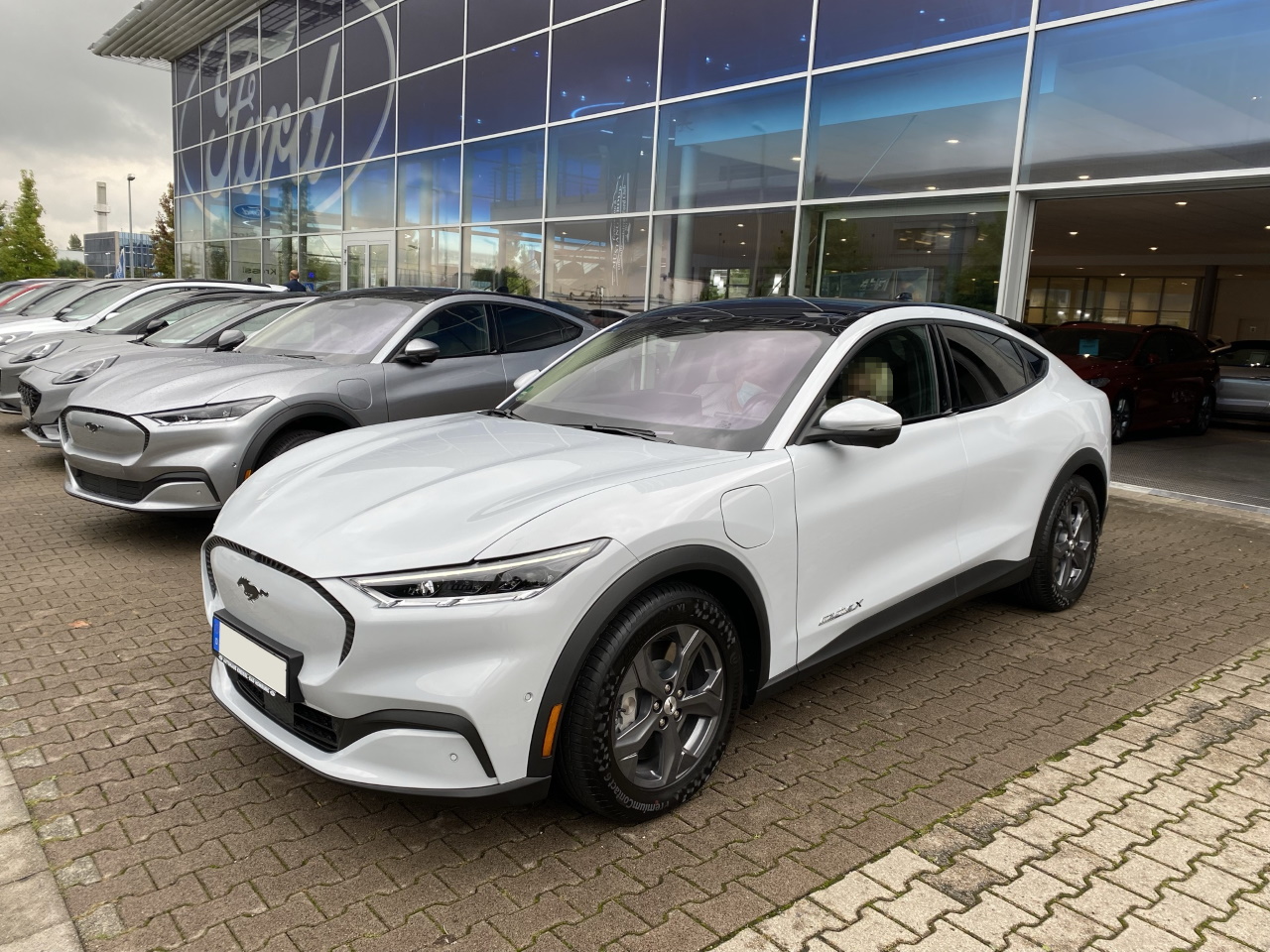 Picked up mom’s new car yesterday. It’s an Extended Range RWD with the Tech Package 2 (all the things + pano glass roof) in an interesting color - I think it’s called Space White in the English-language markets; not really a white, but a very very light blue, that barely comes across on pictures, but looks quite good IRL in my opinion. I haven’t had the opportunity to drive it at all yet, but mom’s initial impressions seem to be very positive.

For now, I’m quite busy with work and other stuff until the weekend, so here’s hoping the 100% charge it was delivered with will be enough for her until then :D And then on Saturday I’ll teach her how to actually charge the thing. Home charging is happening at their place, but will take another couple months, so it’s public charging only for now - shouldn’t be an issue though, with the fairly massive range and how little she actually drives.

Finally got to spend some time with the Mach-E, and build some impressions. In no particular order:

(+) It pulls quite nicely. Not as punchy as the Tesla, but 216 kW is still plenty to be comfortably quick. The three available driving modes change the pedal feel a bit, for both accelerating and regen-braking, but don’t make too much difference ultimately - it still feels much like Chill Mode on my Model 3.

(+) One-pedal driving is on par with the Tesla, very nicely implemented and smooth to drive.

(+) Steering is very nice, precise and well weighted, maybe a bit light for my liking but kinda perfect for effortless city and B-road driving.

(+) Ride is firm, but not uncomfortably so. You feel the overall weight of the car, but not in a bad way, and with the fat tires on smallest possible (18") wheels it eats up small road imperfections without noticing, much unlike the Model 3 on its 20" and PS4S tires.

(+) It’s a fair bit quieter than the Tesla. Exception: AVAS noise in reverse, the hell is that bonging, I’m not driving a delivery truck here…

(+) Infotainment is overall quite good. The screen is responsive, and the UI is decently well designed to contain a million settings and still be usable day-to-day, with all the important stuff quickly accessible.

(++) Driver assists are quite a lot better than I expected. Maybe I haven’t driven many other decently modern and well-equipped cars other than my daily driver for a while… Autopark is a bit fiddly to work but parks nicely and not as slowly as some others I’ve tried, ACC is nice and easy to use, and Lane Assist actually surprised me most by being quite close to the basic Tesla Autopilot in function and smoothness. And then there’s stuff that the Tesla is plain missing like a 360° and forward bumper cameras (damn awesome to have), rear cross-traffic alert, and proper “dead zone” alert lights in the mirrors.

(–) The “On/Off” button. Whyyyyyyy? Maybe I’m spoiled, but I’m used to getting in my car, pressing the brake, shifting to D and going; and then shifting to P, opening the door and walking away. Here, you need to press the On button to actually “start” the car, and you need to be holding the brake while doing it - which is difficult with the “easy entry” seat sliding far away from the pedals. And if you get out while the car is still “running”, the damn thing honks at you! Like with the actual horn! While you’re standing right next to it! Wtf Ford, just turn the car off if I get out after parking and be done with it, why wake up half the street instead…

(-) Similar minor inconvenience with the charging door: it’s not automatic, and you have to re-insert the CCS pin cover and then close the door (with the latch that doesn’t engage properly half the time for some reason) before driving off, else it will bong and beep at you a lot. Again, I’m maybe spoiled by my daily driver here - I take out the cable, put it into the charger / in my frunk, and get into the car, meanwhile the charging cover closes by itself and I don’t even need to consider it.

(+) Frunk is huge and the weird organizer grid actually fits perfectly for a bunch of stuff mom likes to keep in the car (bottle of washer fluid, mobile charger, Type 2 cable, some cleaning stuff, etc).

(-) Frunk cannot be opened from the key (there’s a button, but it does nothing; yes, I tried double-clicking, holding and everything else, no worky), and the opening lever is in the same spot as the hood opener in ICE cars. Easy enough to find, but not the most easy to access every day location for it, really.

(-) Charging speed isn’t shown in the display - only the time it will reach 80% (on DC) / 100% (on AC or on DC above 80%). Also, if you “turn on” the car while the charger is still communicating and the charge hasn’t started, the charge starts but doesn’t show in the UI at all - only if you turn it off and then on again, I assume a software bug here.

(-) No way to define a “global” charging limit - only per charging location that you’ve visited at least once, and nicely hidden in the menu depths.

(-) Fan goes to “bloody loud” when charging at measly 11kW on AC. Apparently a known bug, to be fixed either OTA or via an in-shop update at the dealer… clarifications in progress.

(+) Charging state is shown at a glance via 5-segment LED ring next to the plug, and there’s a button to end charge and unlock the plug right there - very nice.

More to come in future updates, I assume :) So far overall mom and me are both quite happy with the vehicle.